New Report: The Succession Trap. How the C-suite thinks about leadership transitions and why it's wrong 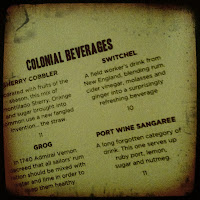 My colleague Scott McMurray recently wrote an excellent post about the Works Progress Administration (WPA) and the program’s vital role in Depression-era rebuilding of our nation’s economy and infrastructure. I’d like to piggyback on that and write about the WPA’s vital role in my dinner last week.

Operating out of the same location as Chef José Andres’ famed Café Atlantico restaurant, which took Washington, D.C., by storm about 25 years ago, America Eats Tavern is the namesake of a 1935 WPA program that sent unemployed writers—including plenty of unknowns, but also such luminaries as Eudora Welty, Ralph Ellison and Saul Bellow—to capture the unique stories, ingredients and rituals behind America’s melting pot of culinary culture. Writers traveled the country, seeking out hidden kitchens, family recipes and regional food festivals. The material was collected, but never properly exhibited or published. Most of the content has been collecting dust in the Library of Congress and National Archives for the better part of a century.

A few years ago, Brooklyn author Pat Willard uncovered these archives and followed them on her own trek through contemporary America, searching to see which traditions remained. Willard published her findings in the 2008 book America Eats!: On the Road with the WPA—the Fish Fries, Box Supper Socials, and Chitlin Feasts That Define Real American Food.

Chef Andres took the concept one step further, going back to the National Archives and putting his own unique spin on these traditional dishes. He added short historical blurbs under each listing. It took us longer to read the menu at America Eats Tavern than it did to actually eat the food, but in quick order we sampled:

To wash it all down, we had Franklin’s Milk Punch (from Benjamin Franklin’s 1763 recipe), Grog (sailor’s rum mixed with lime to prevent scurvy), and Switchel (a field worker’s drink made of rum, molasses, cider vinegar and ginger).

The whole thing may sound gimmicky—and in some ways it was—but the meal was tasty and it’s rare that one gets an opportunity to truly “taste” history. But be warned, a meal with this much research and substance behind it doesn’t come cheap ($78 for a two-person Lewis and Clark-esque Bison Steak).

Behind the restaurant itself, though—newly opened, on Independence Day and only up for six months—is a deeper purpose. A partnership between ThinkFoodGroup and The Foundation for the National Archives, the pop-up restaurant benefits the National Archives Experience—an initiative to “open the stacks” of our preserved documents and artifacts and allow visitors to explore forgotten records like the WPA materials that Willard and Andres found so compelling. These intrepid explorers found buried treasure in the archives that has thus far yielded a book, a restaurant and a “What’s Cooking, Uncle Sam?” exhibit tracing our government’s impact on what we eat. The goal of the project is to open a new museum on the National Mall where visitors can more directly interact with similar gems.

Our founder likes to say that “archives confess truth” and people seek this kind of substance and authenticity, whether they’re hearing a story or sitting down for a meal in D.C. I’m hoping this latest National Archives concept becomes a reality. I’m curious to see what people will pull from the stacks, how they’ll make it their own and which of these elements from our buried past will find their way back to an evolved future.

Featured Podcast Guest: Ram Charan The following is an excerpt from the transcript of a… Read More

Looking Ahead: Publications and Storytelling in 2021

With hundreds of books and other publications to our credit over the past 40 years,… Read More

This article was originally published in 2015 but updated in 2020. History Factory is