On a Sunday in mid-September, I flipped on the Jets-Titans game, only to see two teams that looked completely unfamiliar. Instead of the Jets’ green/white jerseys versus the Titans’ navy/powder blue, facing each other at the line of scrimmage were navy/gold and blue/white/red . . . with oil derricks on their helmets! What’s more, the referees were wearing orange stripes!

“They’re throwback uniforms,” my husband informed me. “What’s the occasion?” I asked. I had seen professional sports teams don historical uniforms before, but nothing this drastic, and never both teams at once. The occasion was the 50th anniversary of the American Football League (AFL), which played its first season in 1960 with eight teams, the New York Jets (then the Titans of New York) and the Tennessee Titans (then the Houston Oilers) among them. The league was celebrating with “Legacy Games” throughout the season, in which former AFL teams (the league merged with the NFL in 1970) played each other wearing their historical uniforms.

When I hear of a company celebrating its history, I’m always curious about the manner in which they do it. Professional sports, after all, are a business, and the industry crosses the same milestones as any other. But as we remind our clients at The History Factory, anniversaries are an opportunity as much as they are a reason to celebrate. So, I wondered, was the NFL making the most of its history?

Sure, as a fan, I found the uniforms interesting (although slightly confusing at first), and I appreciated the historical content included as part of the NFL’s weekly programming, but what did that do for the business?

A little research uncovered two avenues. First: the fans. For many, seeing the retro uniforms sparks much more than mild curiosity and philosophical musing. To celebrate their team—and make a fashion statement—zealous fans immediately want to own a piece of football history. As NFL spokesperson Johanna Hunter said in a Knoxville News Sentinel article, “Fans are buying the retro merchandise and appear excited about the AFL Legacy project.” She added, “There has been demand by fans, and with the popularity of the Legacy uniforms we’ll see them (legacy inspired gear) again next year.” The League gets a percentage of the wholesale price of the merchandise, and has reportedly raised its fees over the years. So, generating enthusiasm among fans for throwback uniforms adds to the NFL’s bottom line.

Second: the players. While wearing throwback uniforms does bring mixed reactions from the locker room, even if they aren’t fond of the color and style of their temporary duds, many players still see the benefit in honoring the League’s traditions. “I’m not a huge fan of it, but it’s part of the legacy of the Buccaneers,” said Tampa Bay center Jeff Faine in a PewterReport.com article discussing the team’s decision to wear throwbacks in a recent game to “honor the 1979 team that made the NFC Championship Game, as well as Hall of Fame defensive end Lee Roy Selmon.”

The Buccaneers were 0-7 going into the game (against the Green Bay Packers) in which they donned the uniforms. Hungry for their first win, some took inspiration from history. “Whatever uniform they put on us, we need to go out there and get our first win and represent this man they’re putting in the Ring of Honor [Selmon]. There’s a lot to play for,” said defensive tackle Chris Hovan. The result? Tampa Bay: 38; Green Bay: 28.

For the players, taking part in these traditions can inspire them to live up to the great moments of the past. And for the business, winning never hurts the bottom line. 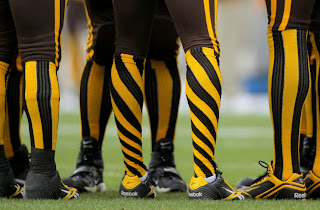 Epilogue:
I settled in this past Saturday to support my husband’s alma mater, The Ohio State Buckeyes, in their traditional, end-of-season faceoff against arch-rival Michigan. What’s the first thing I noticed? The Buckeye uniforms, of course—throwbacks to the 1954 championship team, whose 55th anniversary they’d recently celebrated. By now used to seeing unfamiliar football gear, I didn’t pay much more attention to their attire . . . until the sideline reporter flashed on the screen holding a pair of the Buckeyes’ retro pants.

Apparently these were no ordinary throwback uniforms. While they looked like the originals, the material was far from it. The uniforms were made using cutting-edge Nike technology, were extremely lightweight, and had extra padding to enhance performance.

Ohio State had taken the anniversary opportunity to try an innovative new product, which, if proven effective, could become a replacement for the team’s standard uniforms. By celebrating tradition, Ohio State simultaneously took a step to move its team forward toward a more productive future. Did it work? Final score: Ohio State: 21; Michigan: 10.